I have tweeted a few times about the web documentation we built at N26 and how I think this is one of the things we have truly nailed over the last few years. In this article, I would like to share my experience more in details, and give suggestions on how to write helpful documentation.

The purpose of technical documentation is to help people, of any level, perform the task at hand. It should serve as a knowledge base and a guide. It should explain how things work and how to do things in a given project.

Having said that, the first thing I personally feel strongly about when it comes to documentation is that it is not a history document. It should not tell the tale of how things were back in the days™, or how they will eventually maybe hypothetically be in a distant future. It should describe the current state of things only.

Speaking of the author, I believe it should be non-existent. The personal experience and viewpoint of the author is irrelevant to the purpose of technical documentation. I recommend using “we” or “you” all over, depending on whichever you prefer or is more suited to the content. Remember that the more consistent the better.

The biggest problem of technical documentation—probably after the lack thereof—is keeping it up-to-date. You know how it goes: someone writes a handy guide for a feature of some sort. Then, months later, someone else changes the way the feature works, but completely forgets about the documentation. Then months later, someone finds the documentation to update the feature again, but it is completely obsolete and makes no sense whatsoever. And everybody’s sad.

N26, like many companies, uses the Atlassian tools suite, including Confluence for documentation. Most of the company’s documentation lives there so it can be searched, used and most importantly audited. That mostly matters for topics that are likely to be audited such as product, legal, compliance, data privacy, banking regulations, security and such.

We keep our documentation on GitHub, alongside the code. The web platform is stored in a single repository, which makes it even easier. We have a docs folder at the root level which contains all our documentation in Markdown format. A few benefits to that:

To make it even less likely to forget updating documentation, we also mention it in our GitHub pull-request template, so we have an extra reminder when submitting a pull-request for review. 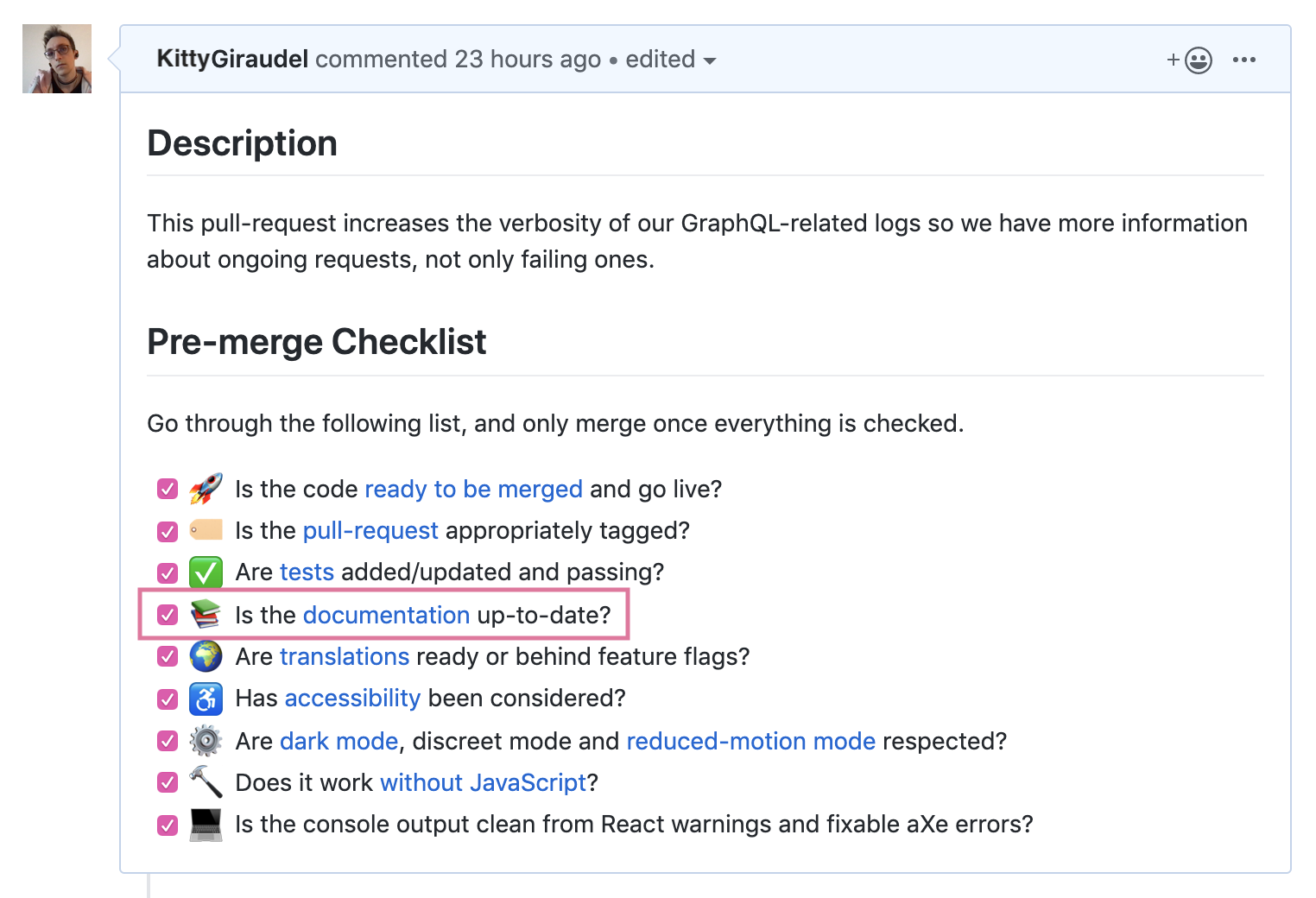 Documentation is only as useful as it is read. There is no point having the best docs in the world if nobody knows it exists. So it’s important not only to emphasise on the fact that documentation is a first-class citizen like code, but also to make it available to everyone.

In order not to restrict access to GitHub users, we decided to build it with Gitbook and publish it on a route of our testing servers. The nice thing about Gitbook is that it comes with a search engine, a soft design, a robust navigation system and some accessibility features out of the box.

Somewhere in our deployment pipeline, we run the following command:

And our Express server has the following route:

And voilà, look at this beauty: 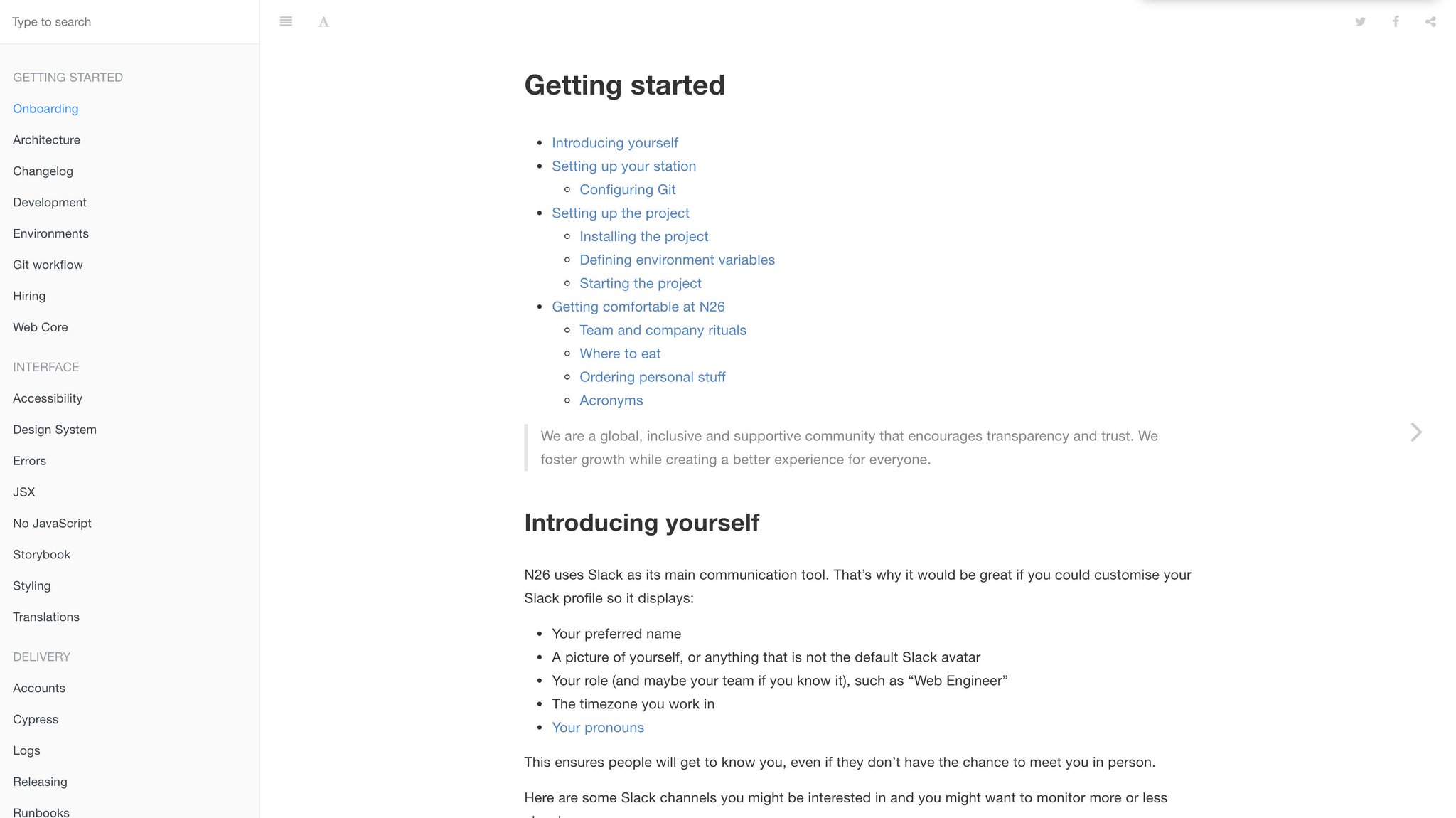 Once our documentation is up and running, it is important to actively promote it. Getting-started guides and related READMEs should mention and link to it. The documentation itself should be generous with links to other parts of itself, cross-referencing pages to encourage people to browse through it.

When answering someone’s question, it is a good idea to join a link to the relevant section of the documentation if it contains the answer or related content. And if it doesn’t, this is likely to be a good opportunity for an addition.

Similarly, I recommend openly announcing (in an organisation tech channel of some sort) when new pages are being added to the hub. This contributes to growing the influence of the documentation hub within the company.

So if I had to sum up, here is a TL;DR of what I would recommend in regard to documentation:

Documentation is a living organism. Our hub is 3 years old and keeps growing on a daily basis. As of writing, it is almost 60,000 words (or the equivalent of ~200 pages book) spread across about 60 Markdown files.

The more people rely on it, the better its quality as there are more and more authors and maintainers. It is everyone’s responsibility to keep it alive and healthy, from the new-comer to the most senior person on the team. Everyone reads docs, ergo everyone should write docs.

Oh, and in case you came for the memes, you’ll be pleased to know that this has been in our README for pretty much ever: